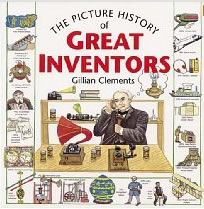 People That Changed the World With a Bright Idea
Inventors
Plato once said, "Necessity is the mother of invention." As long as there is a need for something there will be an inventor to create it. Trial and error is the main process to create something new since our first ideas rarely work perfectly. Edison is no stranger to this fact and is known for saying, "I have not failed. I’ve just found 10,000 ways that won’t work," while inventing the light bulb. This fierce drive to do what no one has done before is what captures the hearts of people making them long for the romantic era before infomercials; the magical time when inventors wore goggles and vials of liquid exploded here and there. Then again, dancing robots and touch screens are pretty awesome. The people in the books below invented the amazing things we take for granted now, so read about them!